The City of Worthington began planning for a recreational pathway along the Olentangy River in 1975. By 1977, this Class 1 bike path was completed and also featured grassy open spaces, two neighborhood play areas and neighborhood sports fields. In 1981, the Olentangy tennis courts were added, and in 2006, the path was extended an additional mile to where it now ends at Worthington Hills. 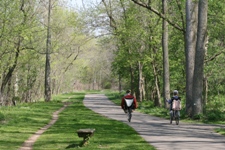 Any organization wishing to plan an event utilizing Worthington's section of the Olentangy Trail must first obtain a permit from the City of Worthington's Director of Safety. For a permit please contact the City Clerk's office at (614) 786-7347. Those who use the trail for special events are asked to observe Parks & Recreation's Conditions of Use.

The following links are great resources on City of Worthington and Central Ohio bikeways: