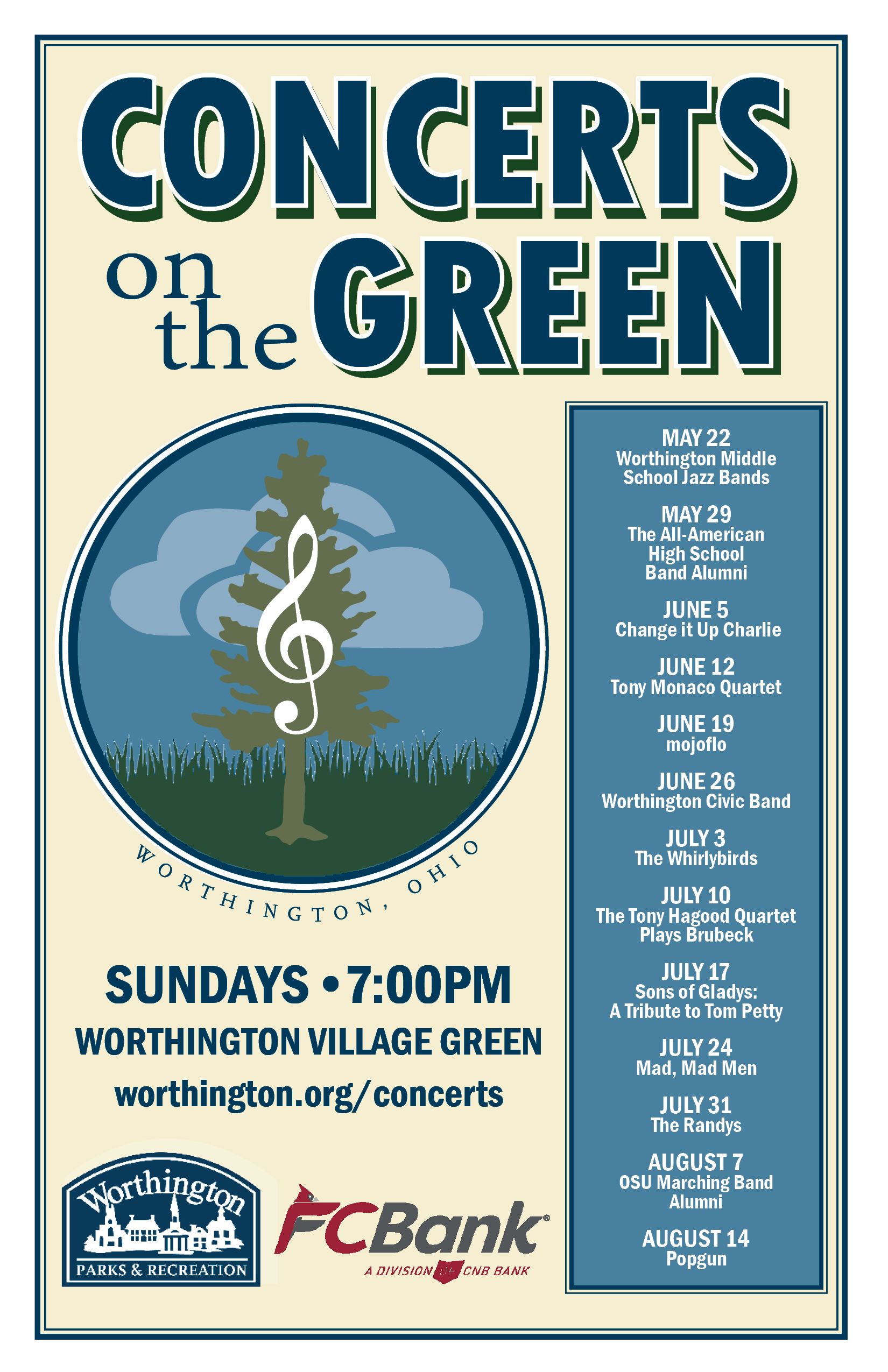 Every Summer, the Worthington Parks & Recreation Department hosts the Concerts on the Green series which runs from May 22 to August 14 beginning at 7:00 PM.

These family-friendly concerts are FREE for everyone through the generous support of FC Bank. All performances are held on the Northwest Quadrant of the Village Green (corner of High Street & Dublin-Granville Road). Parking is available at Kilbourne Middle School, Griswold Center, Worthington Library, Huntington Bank, and the Worthington Presbyterian Church. In the case of inclement weather concerts will be cancelled.

Join us for our annual kick-off concert with the musicians of tomorrow. Jazz Bands from both Kilbourne and Worthingway Middle Schools will be performing selections from their 2022 show. Come and hear why this band has consistently received the highest ratings at state competitions. Director: Ryan Alexis

June 5 – Change It Up, Charlie

A mix of Blues, Jazz, All-Around Americana combine for an evening of “Outlaw Lounge Music”. Truly a one-of-kind Columbus band.

One of the world’s greatest jazz organ players is from right here in Columbus. Mentored by the legendary Jimmy Smith, Monaco has mastered the Hammond B-3 with infectious jazz and funk sounds. He normally wows crowds with his trio, but he’s bringing his quartet for this special performance. A long time coming, this is Tony’s first visit to the Village Green!

Named “Best Band” by (614) Magazine for the last six years in a row, this band is a powerhouse. In combining hard hitting horns, seductive melodies and a meticulously crafted stage show, MojoFlo has built a fiercely loyal fanbase. Their dynamic live shows feature the group’s vivacious vocalist Amber Knicole. From aerial performances and Soul Train lines to hula hoop choreography and near-cringe-inducing leaps off the drum riser in 6-inch heels this lady has a knack for leaving audiences enthralled.

The Worthington Civic Band was formed in 1973 and is sponsored by the Worthington Parks and Recreation Department. The band has performed at the 1975, 1993 and 2001 American School Band Directors Association National Conventions, the 1983, 1989, 1992 and the 1998 Ohio Music Education Association State Conferences. In addition to local concerts, the band performs for many area retirement and nursing homes, as well as for charity fund-raising functions.

Whirlybirds play an amalgamation New Orleans-style Dixieland and pre-WWII era jazz while still incorporating more modern elements of jazz, pop, soul and funk. The result is unique arrangements of original “swang” music (as well as standards/covers) designed to engage and entertain the audience in a high-energy, live show.

“Take Five” (and more!) as the Tony Hagood Quartet performs the music of Dave Brubeck. The Dave Brubeck quartet, featuring Paul Desmond, appeared on college campuses in the 50’s and early 60’s, introducing jazz to thousands of young people. Join Tony, and his quartet of amazingly accomplished musicians for this one-of-a-kind concert!

July 17 – Sons of Gladys: A Tribute to Tom Petty

Members of this band performed a few years back in a stellar Elvis Presley tribute. This time, they’ve mastered the best of Tom Petty’s decades-spanning catalog with lead singer Phil Clark.

Playing an eclectic mix of 50s and 60s-style rock, pop, country, and blue-eyed soul; all performed with style, grace, and dead-on two and three-part harmonies. You’re sure to have a great time!

The highest attended concert of the Summer continues in 2022, with a visit from drum majors from year’s past, a script-Ohio parade around the Green and all of your Buckeye favorites. Get there early for a seat!

In the last few years, Columbus supergroup ‘Popgun’ has emerged as a force to be reckoned with. Their flawless execution of the select gems from the pop-rock canon is a lesson in musicianship and a blast to watch. They go where few cover bands dare to tread as they perform classics by David Bowie, Electric Light Orchestra Queen, Led Zeppelin, The Talking Heads and so much more. Don’t miss this grand finale show! 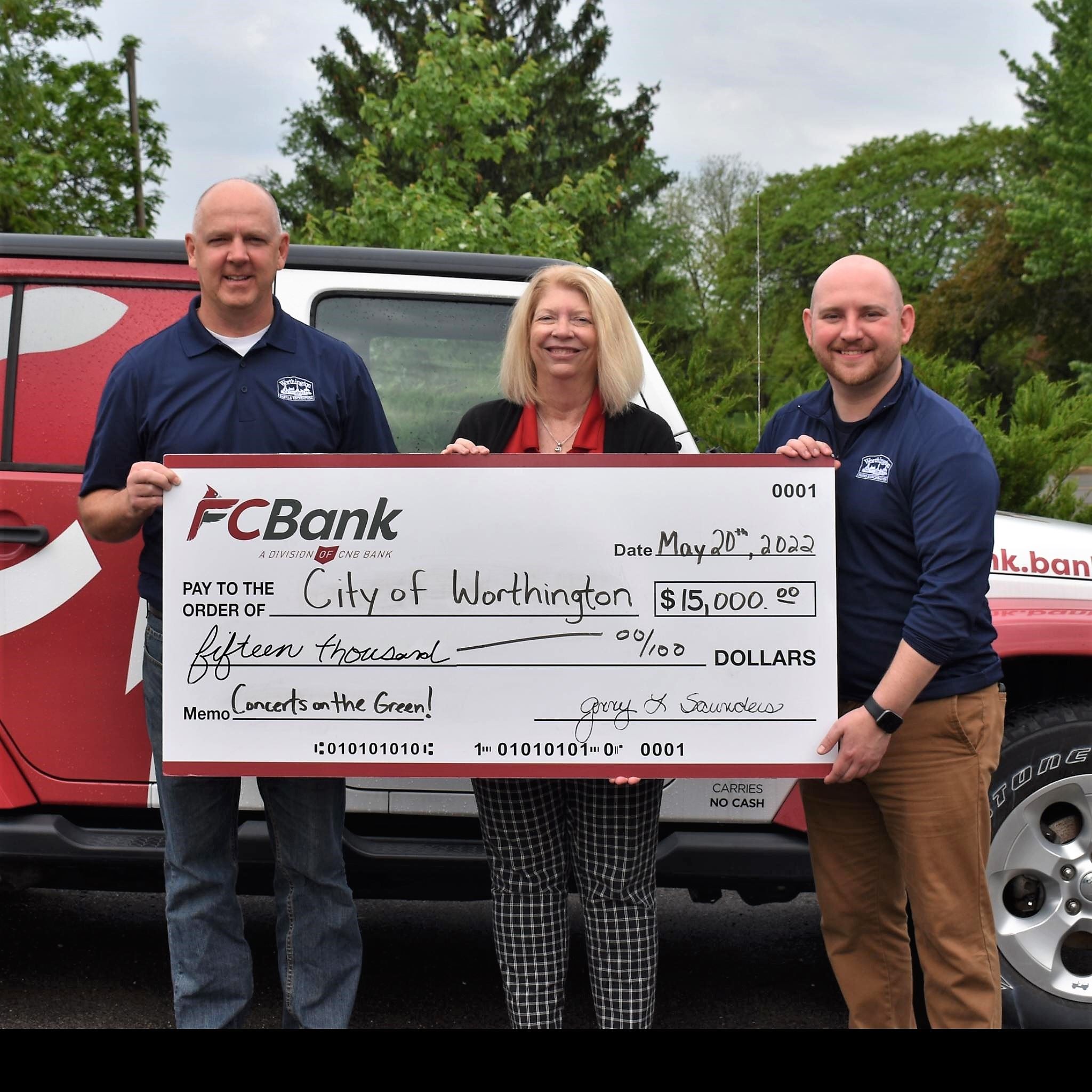 Application for 2022 Concerts on the Green series.

Once application is complete, please send to wprd@worthington.org